Golden Girl's udder at 7 years of age and 6 freshenings, I am so proud of the way she has held up over the years! 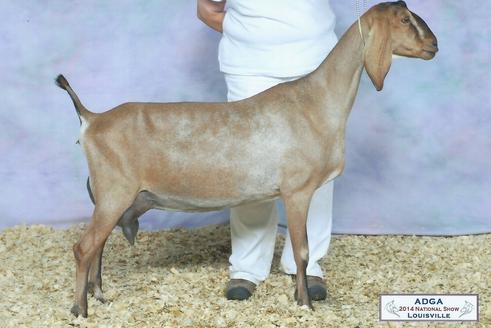 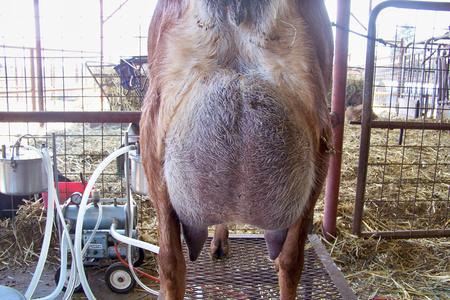 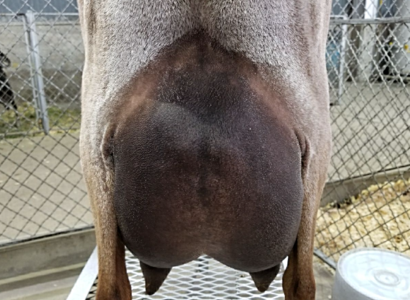 My little plain brown doe doesn't really attract much attention until you notice that she really doesn't have any faults to speak of.  Another fine granddaughter from our Chloe, Golden Girl does not catch your eye as readily as Brandywine being a somewhat nondescript light brown color.  However, it is hard to miss that high, wide escutcheon and that long, smooth foreudder.  Golden Girl has won three championships as a milking doe.  She won what should have been her final leg at the 2017 SCTDGA show in Brenham.  Unfortunately there apparently was a major error in record-keeping so we still have not been awarded her final leg.  At this point in time, I don't know if it will be awarded or not since we have not received her notification letter.  It would be nice to have her officially a finished champion but the lack of that 3rd champion leg does not diminish her in my eyes.

BREAKING NEWS:  We finally got word after more than a year that our Golden Girl has finally been awarded her final champion leg!

She is the dam to our  wonderful herd sire Chigger-Hill Red Zone and as such has numerous granddaughters that have already won their restricted legs.​

Yes another one of my hideous full hair udder pictures.  Sorry about the fuzz, although I suspect you will agree, it is hard to detract from that divine, globular udder shape and perfect teat placement.   I have added an udder shot of Golden Girl taken at 7 yr. of age and as a 6th freshener.  This lovely old gal still has what it takes, such a pleasure to have bred an animal with such productivity and longevity.

Golden Girl will be bred to Hops N Lops Wingman for 2020 kids.