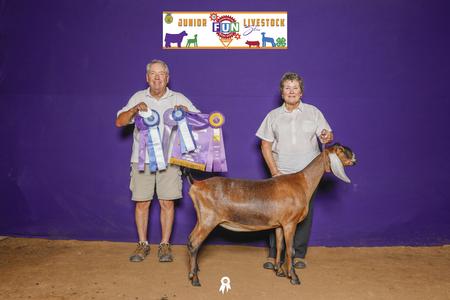 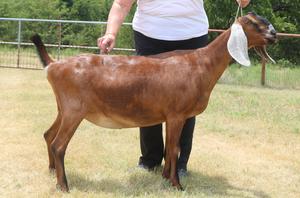 Our junior does have enjoyed only limited showing so far since we don't take junior does to the spring shows.  All we can handle is milkers since we need to return home ASAP to milk our does that stayed home.  We are hoping to get them to a few shows this fall. 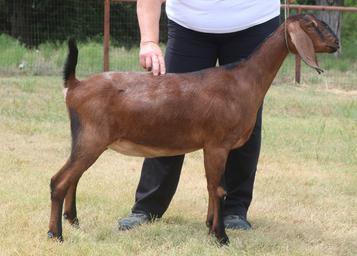 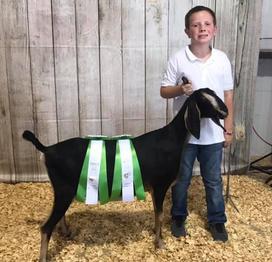 Rockette is the daughter of my favorite 3 yr. old Roseanna and Chigger-Hill  Broadway Joe.  She is retained in the herd and will be shown by my grandson.  She is the perfect show doe for a junior exhibitor, very docile and cooperative like her lovely dam.  UPDATE: Rockette captured a RCH behind her herdmate Dark Galaxy at the Hamilton Legends show.

Galaxy is the image of her dam Affera.  She captured 3 GCH placings at the Hamilton Legends Show.  Winning in the Open Show and also both rings of the Youth Show. She has exceptional depth of body with an extremely wide and high escutcheon.

We are looking forward to seeing her udder after freshening!  She will be bred to Chigger-Hill Red Zone

Ruby is Ron's favorite doeling from 2019.  Our sweet Halo always has the best babies out of Red Zone.  We are hoping she has a spectacular udder like her half-sibling Chigger-Hill Silver Shadow.  Ruby will be shown by my granddaughter Harper Lackey.  Ruby captured numerous 1st place finishes in the fall shows and at the 2019 FWSSR. 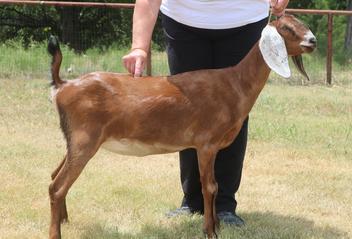 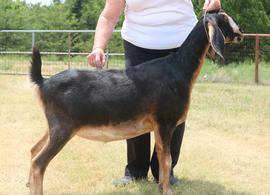 Red Zone really marks some of his kids with that fabulous mahogany red color.  I love this beautiful doeling who is a perfect combination of Red Zone and her dam Chigger-Hill Broadway Brandy, 1st Place Sr. Yearling at the 2017 ADGA National Show.  Sangria showed well this past fall finishing several times in 2nd place behind a few of her herdmates. 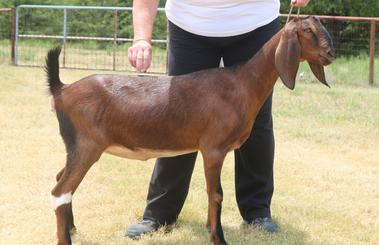