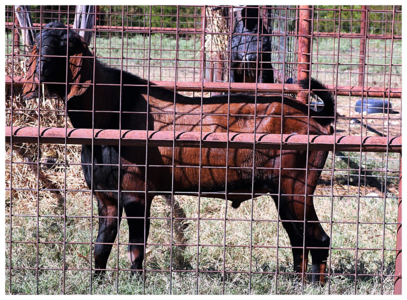 Slick is a combination of great genetics from the Lakeshore, Hoanbu, and Wingwood herds.  He is very sharp and refined and I feel he will compliment our wide-bodied, sturdy girls. I am particularly excited about Brandywine's upcoming kids from Slick.  I think I might be looking at a future homebred herdsire from this combination.  Both Slick's dam and his paternal granddam recorded "E" udders as 2 yr. old does so I am looking for great udders from his daughters!  City Slicker is listed here for reference purposes, I used him heavily early in the 2016 breeding season.  He was bred to many of my top does.  After deciding to save his 2016 son from Brandywine, I offered him for sale and he has joined the herds of Stacy Adams and Shannon Kempter Little.  I saved three daughters from the 2016 kid group, they are every bit as fancy as I expected and have topped their respective classes at the fall shows.

No show pictures for the bucks.  I gave up showing bucks when I got past 60, so these handsome fellas will not be sporting any CH designations.  The proof of their worthiness will have to lie with their daughters.  I did manage to take some pretty good pictures this fall and I will also provide info and pics of their dams when available.  I am proud and ever so thankful that we have enough genetic diversity in the herd after 25 years that I can safely use predominantly  Chigger-Hill bred bucks.  I have purchased top genetics over the years but I have found that sometimes you give up more than you get when bringing new genetics into the herd.  I feel safest and most confident in using our own bucks when possible.

This massive spotted buck is the gentlest of creatures!  Thank goodness he is extremely gentle and easy to handle because when his head is erect it hits me at about shoulder level!  He is a rather nondescript mass of spots but he does sire exceptional spotted color, both black and dark brown.  He has excellent feet and legs and tremendous length and depth of body and no doubt weighs in at about 300 lbs.   El- Capitan is the result of some of the best combined genetics from Lakeshore Nubians, Saada Nubians, and Chigger-Hill Nubians.  Since I now have his grandson, he is enjoying himself with Michael and Cassey Ball and their great kids at 4B Nubians in Ennis, TX.

Pictured above at the 2018 ADGA National Show after placing 6th in the 4 yr. old class. 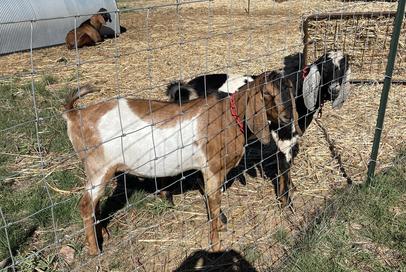 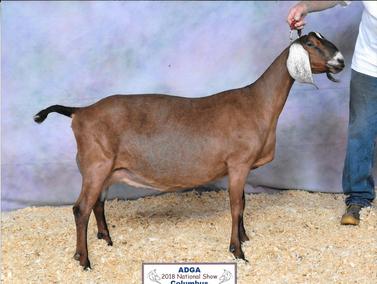 These two twin brothers born to one of our foundation does, OK Corral Super Sophie (Superbuck genetics) made a tremendous impact on our herd. We used Goliath for over 13 years in our herd, he was just that conformationally correct that he could still breed does at an advanced age.  In addition to being the foundation of the genetics of our present herd, he also made a strong contribution to Caroline Lawson's TLC Nubians herd being the grandsire of her wonderful CH TLC Sam's Belle Star.  It is my one regret that I did not do more to promote Goliath.  I was too involved with a full time career and raising my children at the time.  Both Goliath and Hercules were a pair of great ones! 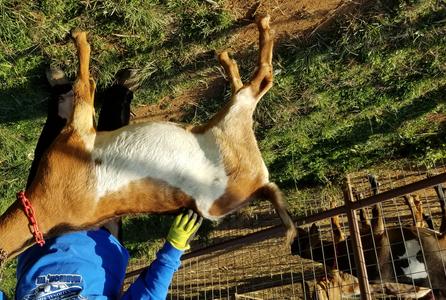 Twilight Zone pictured at 9 months of age. (Still in rut after breeding 4 mature does!) 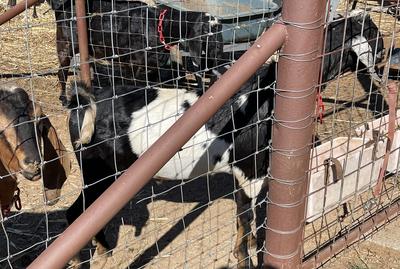 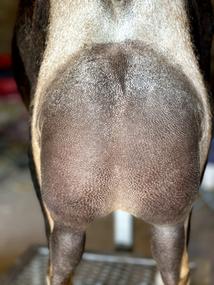 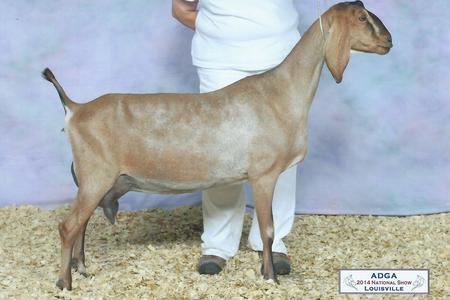 I was so surprised when the 2014 appraiser complimented my young Chigger-Hill bucks and so gratified to have everyone appraise VG even as yearlings!  This beautiful fellow is a gorgeous dark mahogany red color with black mantle and trim.  He is a combination of the genetics from our Buttercup Line of champion does and some of the top Nubian genetics available (Kastdemur's Temerity X J & R Spirit's Dakota Playboy).  Much gratitude to Jim and Kathy Gillham of 4EverR's Nubians for providing a breeding to Kastdemur's Charismatictribute.  We are truly blessed to own this beautiful young buck!  H We have daughters that are sporting great bodies, superwide escutcheons, and excellent teat placement.  Red Zone absolutely stamps his daughters with beautiful color and breed character.  His 2016-2019 daughters are truly something to behold.  I have already had a requests from  two other breeders to purchase RZ, but I simply could not let him go.  This guy is a herdbuilder!​

NEWS FLASH:  Both the 2017 doelings from Red Zone have already won their restricted legs at a very young age.  He sired the 3rd Place Sr. Yearling Doeling at the 2017 ADGA National Show .  His progeny won the Jr. Get-of-Sire class and were named Best Three Jr. Nubian Does at the OK State Fair in 2018 and 2019!

Karbon Kopy is the 2021 son from my favorite doe, Roseanna.  Such a gorgeous bodied doe with the best fore udder in the herd!  Roseanna also has the sweetest temperament!  Kopy is exceedingly handsome and long-bodied like his dam!  I expect to have beautiful kids from him. 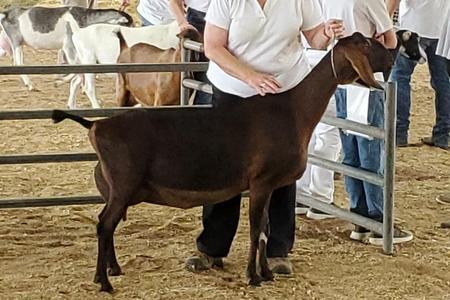 Twilight Zone, what an appropriate name for an animal born during the Covid pandemic and the ADGA NG computer conversion!  This young buck combines the best of Saada bloodlines with Kastdemur and Chigger-Hill.  I am confident that he was a "keeper".  He exhibits outstanding dairy character, excellent conformation with extreme depth of body, and amazing width between between the hocks that carries up to the pinbones.  Excellent udders are present on both the maternal side and paternal side in his ancestor does so I would consider him to be a buck that would sire exceptional udders.  Oddly he most resembles his maternal grandsire Chigger-Hill Slicksilver in coloration, although he is a light tan and white, he carries the black gene from his dam Galaxy and the dark mahogany red from his sire Red Zone. 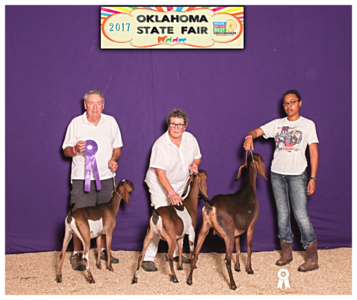 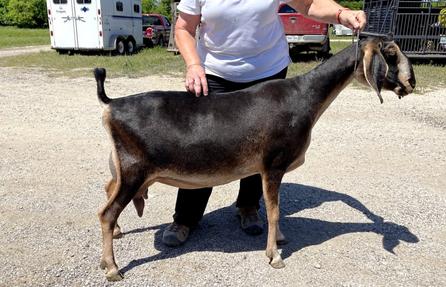 Not easy to get good pictures of these young bucks in the middle of breeding season.  The majority of the does are bred to these bucklings.  I feel that they are very promising and I am super anxious to see what kind of kids they produce!